Childhood is a period of rapid development and is formative for health and well-being and health behaviours throughout the life course (License 2004; Graham & Power 2004). Children and young people’s health, development and wellbeing are determined by physical, social, emotional, environmental and economic influences. In particular, the built environment plays an integral part in child and adolescent development. Exciting, adventurous play spaces, carefully considered childcare centres, neighbourhood walkways and cycle ways, stimulating learning environments, readily accessible public transport, strong, vibrant civic spaces and protected natural environments contribute to personal growth, learning and the creation of strong communities. Developing child and youth-friendly environments is not only beneficial for children and young people, but for all communities in WA.

There are particular groups of children who are most at risk. Those who are poor are more likely to live in neighbourhoods bordering with factories, refuse tips, heavy traffic and other sources of pollution and contamination. These children will have the least access to clean water, clean air and in some cases, education. Rural and remote communities where access to services and resources such as fresh fruit and vegetables, also place children at risk of poor health outcomes.

The health of children is a key advocacy target for PHAIWA.

PHAIWA’s child health focus revolves around environments that support good health for kids. PHAIWA coordinates a children’s environment and health report card project which awards local governments for their work in protecting the health and well-being of young people. Read more about this project by following this link.

PHAIWA is involved in a number of projects that target children with our signature project being the Children’s Environment and Health Local Government Policy Awards. This project works with local governments to showcase policies that promote the health and well-being of children and young people. Our key partners include Healthway and the West Australian Local Government Association. Our key contributors include the Cancer Council WA and the Commissioner of Children and Young People.

PHAIWA is also a contributor on the Squeaky Clean Kids project that aims to reduce the incidence of trachoma in regional Western Australian (WA) Aboriginal communities by promoting facial and hand hygiene and ensuring healthy bathrooms. The WA Country Health Service supports the program and will distribute bars of free soap to Aboriginal communities in the Kimberley, Pilbara, Mid-West and Goldfields regions of WA. Other important strategies include the delivery of health promotion messages to adults within communities and the assessment of bathrooms in homes. These bathroom assessments are being conducted by Aboriginal Environmental health Workers who will also conduct minor repairs and install soap holders in private homes. PHAIWA is assisting with the evaluation of this project. 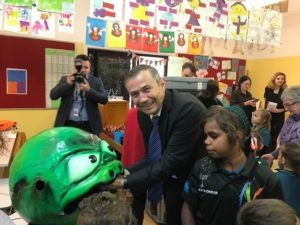 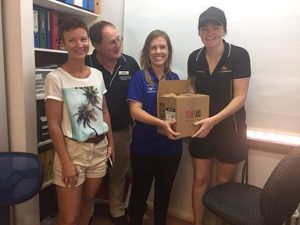 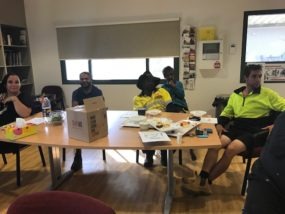 Left to right: The Hon. Minister Cook launching the program in Kalgoorlie; delivering soap to Spinifex Health Service in Tjuntjuntjara; one of the SCK’s workshops with Aboriginal Environmental Health Workers in Wiluna